It is not often a full-page apology by a multinational is compared to a Shakespearean sonnet. Why does Tesco appear to have turned to verse in its latest corporate mea culpa?
"A horse, a horse! My kingdom for a horse!" (Richard III, Act 5, Scene 4)
Shakespeare knew a thing or two about stirring emotions.
Copywriters have been slyly plundering the rhythms and cadences of his verse to impart epic qualities to the products they are selling since the early days of advertising.
But there is one kind of ad where literary flourishes, and outpourings of emotion, are normally in pretty short supply - the full-page apology.
Taken out by corporations in crisis, when they can't get their message out any other way, they are the advertising equivalent of a cold shower.
They tend to stick to basic information. If they resort to emotion at all, it is sorrow and remorse.
When horsemeat was discovered in its value burgers in January, Tesco took out a full page ad in several national newspapers.
It was a fairly standard example of the genre: "We have immediately withdrawn from sale all products from the supplier in question, from all our stores and online… We and our supplier have let you down and we apologise." 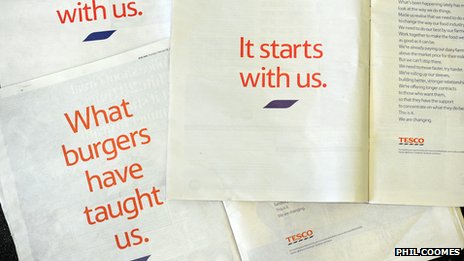 But the supermarket giant was not finished there.
A promise to get to the bottom of the horsemeat issue has escalated, through a series of double page advertisements in national newspapers, into an apparently heartfelt vow to change Tesco's entire way of doing business.
Specifically, to improve the way it treats farmers and other suppliers and simplify its supply chain.
There is a strangely poetic quality to the ads, in the way the sentences don't reach the end of the lines and the language employed has echoes of a sonnet.
Take this, from What Burgers Have Taught Us:
"We know that all this will only work if we are
Open about what we do.
And if you're not happy, tell us.
Seriously.
This is it.
We are changing.
Or this from the final ad in the series It Starts With Us:
"What's been happening lately has made us
Look at the way we do things.
Made us realise that we need to do our bit
To change the way our food industry works."
Tesco insists these ads are not deliberate attempts at poetry.
"We're using the ads to keep our customers updated with the steps we're taking, as well as highlighting some of the commitments we've made, such as sourcing all our fresh chicken from the UK from July," says a spokesman.
Others beg to differ.
"It resembles poetry in the way that it is laid out", says poet Matt Harvey.
"It gives the words a portentous quality. They are reaching for gravitas, and probably achieving it.
Continue reading the main story

"It is spot on iambic pentameter in parts. You could find line four in a Shakespearean sonnet."
It Starts With Us has "an incantatory quality", in the way it repeats certain phrases, trying to "cast a spell" on the reader with words, adds Harvey, a former poet-in-residence at the Wimbledon Tennis Championships.
"It is a love letter to their customers. It is saying 'things haven't been easy, I have had a look at myself, I have had a look at our relationship and I know I can change'.
"Perhaps the next ad will say 'maybe we should go and see somebody about this'."
Christopher Burlinson, an English lecturer at Cambridge University, sees parallels with the work of 17th Century metaphysical poet George Herbert, who used the patterns of the text on the page to underscore the meaning of his words.
"Tesco are calling on a well-established poetic technique," says Burlinson
"The text is shaped like an arrow. It points downwards on the page. The lines get shorter as you near the end. It is all pointing to the Tesco brand."
Tim Johnson, chief operating officer of corporate crisis management specialists Regester Larkin, says the ads are a "highly innovative" example of a company turning a PR disaster to its advantage. 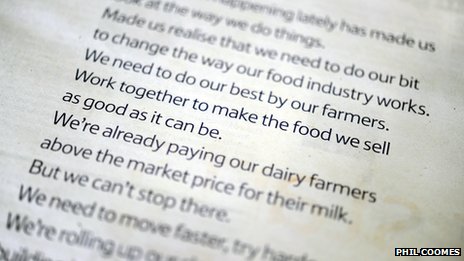 They have seized the horsemeat scandal as an opportunity to address wider concerns about the business, against a backdrop of "disappointing" financial results.
"They have got to rebuild their business and try to re-engage customers and the City. I think they have done it really rather brilliantly," says Johnson.
But economist Andrew Simms says that until Tesco can prove it really has changed its business model, and is making fewer demands on suppliers, the campaign is just "mood music".
"Regardless of its size and creativity, the way they have explained themselves in paid-for adverts, I wouldn't be surprised if you don't see similar problems popping up at regular intervals in the future," says Simms, author of Tescopoly, an investigation into the retailer's business practices.
By turning to blank verse, and block-booking adverts in the national media, Tesco are attempting to "change the conversation" about their company.
"The story then becomes about how they are responding rather than the issue itself. And that really is clever PR," adds Simms.
(With acknowledgement to the BBC)
Posted by The Postman at 04:52